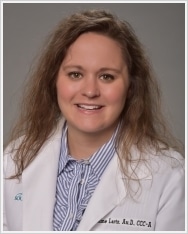 Dr. Caroline Stewart-Glaze earned her Bachelor of Science in Speech and Hearing Science from the University of Illinois in Urbana-Champaign and her Doctor of Audiology from Washington University in St. Louis. She is certified by the American Speech-Language-Hearing Association (ASHA).

Dr. Stewart-Glaze became interested in the field of audiology at a young age as her mother is a professor in Deaf Education at Illinois State University in Normal, IL. She also worked through high school doing clerical work at a local audiology practice. Dr. Stewart-Glaze has an interest in research and is currently working as part of a laboratory at Washington University in St. Louis. She has presented her work at several conferences including the Conference on Implantable Auditory Prostheses (CIAP) in July of 2015 and Early Hearing Detection and Intervention (EHDI) in March of 2016.

Dr. Stewart-Glaze lives in the Central West End in St. Louis city where she enjoys running, reading and knitting. She is also an active member of her congregation at Apostle’s Church in St. Louis city and is on the Executive Board of her local sorority alumnae club. Dr. Stewart-Glaze is committed to providing the highest quality care to her patients so they have the best quality of life possible.